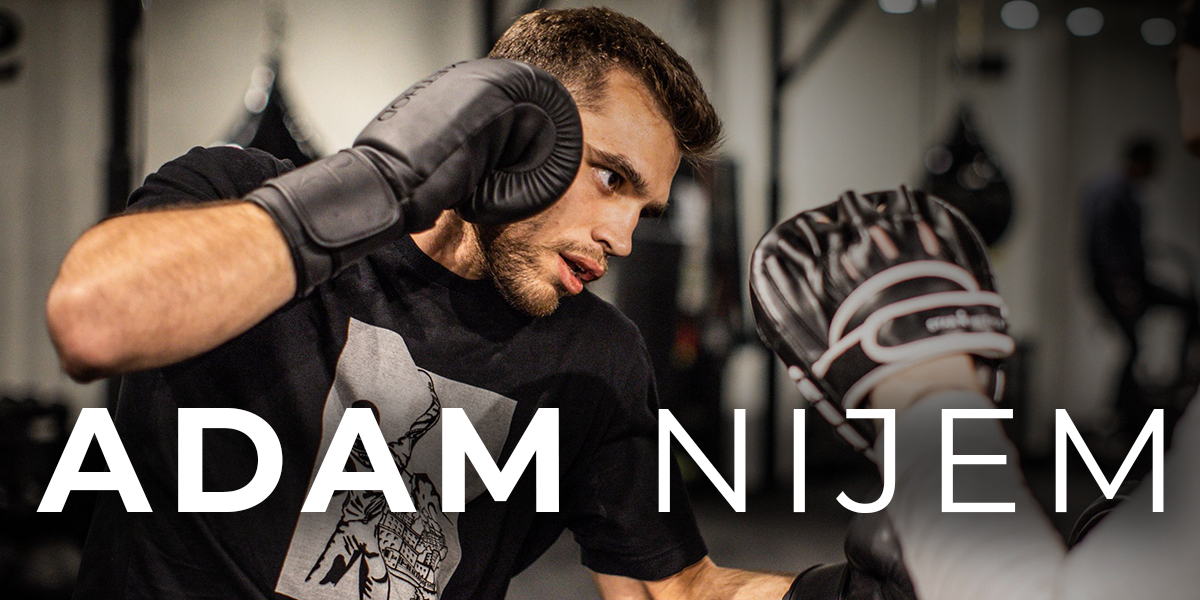 ​ADAM HAS A 6-2-0 MIXED MARTIAL ARTS PROFESSIONAL RECORD, COMPETED WITH SHOWDOWN FIGHTS, AND TITAN FC ON CBS SPORTS. He iS ALSO THE FOUNDER & OWNER OF STAR METHOD BOXING.
Star Method Boxing was founded by Adam Nijem who is the current owner and head coach at the studio located in Walnut Creek. Adam begun playing a variety of sports growing up such as wrestling, boxing, track and field, baseball, football, soccer, and basketball just to name a few! Athleticism is one of the main purposes of Star Method Boxing and each workout takes a piece from these sports and applies them to every client's workout. More than the physical abilities Adam was trained on, it is the mental strength each one of these sports instilled in him which is the driving force behind Star Method Boxing and how the studio is different than any other studio out there.

After growing up in Washington state and starting to box with his oldest brother Joseph, Adam pursued a career in mixed martial arts which led him to live in Utah where his older brother Ramsey Nijem was a current contender for the UFC. Immediately  Adam was surrounded by some of the best coaches in the world as well as some of the best fighters out there. Training in Utah with his brother opened up possibilities a young 18 year old couldn't have imagined, like training and sleeping where the great Chuck Liddell did for so many years under John Hacklman at The Pit. From that time forward Adam knew that this was the path of life he wanted to pursue.

A couple years into his fight career Ramsey and Adam decided that a move to San Francisco could open up more possibilities and take their fight career to the next level. In San Francisco the MMA scene is stacked with high profile fighters and training partners such as Jake Shields, Gilbert Melendez, Nick and Nate Diaz and the rest of the crew known as "The Scrap Pack" and Adam was the young guy training with all these killers, you either swim or drown but Adam found himself swimming with these sharks!

During Adam's preparation for the biggest fight of his life in Bellator MMA he suffered multiple TBI's (traumatic brain injury) and concussions only a few weeks away from the fight. For the next 6 months Adam had to stop teaching boxing, reading, watching television and doing pretty much anything other than sit in a dark room and let his brain heal. During that life altering time Adam was able to game plan on how he was going to be able to make a come back in his career in and outside of the cage. He made a few attempts to get back to training for a potential next fight but couldn't take anymore damage to the head without being hurt for weeks. He had to make a decision, and that decision ultimately led to the start of The Star Method.

Taking the little bit of money he had made from fighting and teaching classes he spent his savings on building out a home gym out of his garage and started to attract clients to workout there with him. After about a year of training clients out of the garage gym he made his first attempt at starting his very own private studio. Out of all the cities in the Bay Area where he had previously taught boxing, he knew Walnut Creek needed a boxing gym that was designed for every day people that wanted to learn how to defend themselves properly and also get into the best physical and mental state of their lives, thus forming Star Method Boxing in 2017!

1 year after the first studio was built the client base grew and the demand for a larger space was there, and thats when Adam made the jump to a 1200 sqft. studio from the little 350 sqft. he had before just across the street. The vision was coming to life, a boutique gym designed to have athletic circuit training and high level boxing all in the same space! Adam knew there was a need for this because each gym he had worked at didn't have enough strength equipment or not enough focus on the boxing portion of the gym, so it was his goal to create a clean and friendly space that had the perfect mix of boxing and athletic training.

Now Star Method Boxing located at 1387 N main st. Walnut Creek is a thriving boutique studio with trainers that all specialize in boxing and personal training! The energy that is in Star Method Boxing is a breath of fresh air for this industry which is why the studio continues to grow. Here at Star Method Boxing we encourage positivity, strength, and happiness which we are all capable of achieving when surrounded by the right support system. Give us a try and see why Star Method Boxing is unlike any other program you've tried before!
​